Varsha Pandey
Here is some information related to the Jagannath temple in Puri.
Puri is also one of the most sacred places on the shore of the Bay of Bengal and one of the best places to travel.
It took three generations worth of time and effort to brick up the humongous walls of the famous temple in puri.
The temple is famous for its annual  Rath Yatra which is witnessed by millions as the three colossal chariots carry the deities.

It is a place where Adi Shankaracharya (one of the wisest philosophers of the 9th century) established the center of wisdom and Goverdhana math.

Puri has also gained special significance as one of the four dharmas.

It is believed that Lord Vishnu dines at Puri.

So Today we are going to tell you more about Jagannath Puri.

Jagannath temple in puri is One of the four Dhams described in Hinduism.

According to Sanatana dharma, Lord Jagannatha is a mysterious god among all.

The creator of existence and the father behind all happenings have a miraculous story associated with introduction to the world.

God’s presence can still be found if you visit Puri.

Jagadish(The king of the Universe)

Jagannath(The god of the Universe)

This Dhamma is dedicated to Lord Jagannath or Lord Sri Krishna.

Because of the location of Puri, the entire area is Jagannath Puri.

Jagannatha is the name of Lord Krishna, consisting of two words: Jagan and Nath, meaning “lord of the world”.

Jagannath is located near the coast of Orissa.

Bhubaneswar is not far from it.

A huge procession of chariots from the main deity of the temple, Lord Jagannath, his older brother Balabhadra and his sister Subhadra, are also taken out of this temple every year.

Ratha yatra, in which three deities are pulled on huge and elaborately decorated temple carts.

On this day the Lord leaves the temple and visits the city.

In Purana, it is also called  Baikunta on earth.

It is one of the four Dhams of  Vishnu.

Story of Jagannath  temple in Puri

The first evidence of the temple is first found at Vanparva in  Mahabharata.

Lord Jagannath once appeared in a dream to  Indradyumna, the marvelous king of Malwa.

And said to Indradyumna, “I have an idol in a cave on Mount Nillanchal. His name is Nilmadhav.

You built the temple and set an idol of mine in it.

The very next day, the king sent Vidyapati, a nearby Brahmin, with his men to Mount Nillanchal.

Vidyapati heard that the people of the Sabar clan worshiped Nilamadhava and that they hid the idol of this god in a cave on Mount Nilanchal.

He also knew that Vishvavasu, the head of the Sabar clan, worshiped Nilamadhava, who hid an idol in a cave and did not want to hand it over to the king easily.

The clever Vidyapati marries the daughter of his chieftain.

Finally, with the help of his wife, he arrives in the cave, steals the idol, and hands it over to King Indra Dumna.

Vishwavasu is very sad to learn that his favorite god idol has been stolen.

Seeing the devotees unhappy, the gods also grieved and returned to the cave as idols.

but at the same time, Raja Indradyumna promised him that one day he would build a grand temple for him and he would surely return.

Years later, the king built a huge temple for Sir Jagannath and asked the Lord to sit in it.

God told me to bring a large piece of wood floating in the sea to make my idol float in the sea from Dwaraka to Puri.

The king’s servants also looked for a piece of the tree, but they could not lift it together.

The king then realized that in this matter he had to seek the help of the Vishwavas, head of the Saber clan, who were prominent followers of Nilamadhava.

Everyone was astonished when Vishwavasu alone lifted a heavy tree and carried it to the temple.

Next, it was time to make an idol of God out of wood.

However, despite the efforts of millions of artisans in the city, no one was able to find a piece.

After that, the god Vishvakarma appeared in the form of an old master.

appeared before the king and said that he could make an idol, but he had one condition. . . No one is to be near him while he is making an idol.

The king also accepted this condition.

After that, saws, chisels, and hammers were heard in the closed room.

Meanwhile, King Gundicha’s wife also approached the enclosed room, but Gundicha did not hear a sound.

Gundicha was afraid that her father-in-law was dead or not.

The queen told this story to the king. There was no sound from inside, so I felt like a king.

The king ignored all conditions and warnings and ordered the door to be opened.

As soon as the door to the room opened, no one was there.

The king realized that this old man would never come again.  The king accepted God’s will and erected these imperfect idols.

From then to this day, all three brothers and sisters sit in this form in Jagannath Temple.

History of Jagannath Temple in Puri

The temple was first restored in the 10th century by King Anantavarman Chodagana Dev of the Ganga Empire in Kalinga.

From found copper plates, it is known that the Jagmohan Temple.

and parts of Vimana were built during the reign of King Anantavarman Chodagang Deva.

After that, Anang Bhima Dev gave the temple its present-day appearance.

After 400 years of constant worship at the temple,  the Afghan commander Kala Pahar attacked and captured Orissa in 1558.

At the same time, temples were also damaged, and worship services were stopped.

To protect the idol from invaders, he confines it to an island in Lake Chilika.

After the country’s independence was declared by Ramchandra Deb, the idol was reinstalled in the temple.

This temple at Jagannath Puri was destroyed three times and the idol was restored after three repairs.

Many stories are famous in Jagannathpuri.

But the most famous story is that one-day mother Yasoda, Devaki, Subhadra, and all the queens came from Dvaraka to Vrindavan.

Mother Yasoda ordered Subhadra to guard the door so Krishna and Balarama could not enter as long as she continued talking about Krishna’s children’s entertainment.

Mother Yasoda started talking about Krishna’s entertainment, and as she continued, everyone fell in love with it. her words.

Even Subhadra forgot the guard at the door and began to listen.

He did not notice the two brothers, the hypnotized Subhadra.

Krishna and Balarama also began to hear this story.

His eyes widened in amazement as he continued to listen.

Naradji began to see every expression on his face, and everyone noticed that someone had come.

Because of this,  Krishna Leela’s reading stopped here.

Seeing this captivating Krishnaji avatar, Narada G said, “Lord, you are so beautiful.

When are you going to incarnate into something like this?” Krishnaji then said that he would take that incarnation from Kali Yuga.

According to Krishna’s promise, the  Lord appeared to King Indradiumna in a dream and commanded the construction of the temple.

He told the king that the door was open leaving it unfinished as if God had appeared in a dream and told him of his creation.

The king erected these unfinished idols in the temple.

For this reason, at Jagannath Puri temples, idols made from tree trunks are worshiped rather than stone or other metal idols.

This  Jagannath Puri temple is famous worldwide for its amazing architecture.

This temple has many quirks not found in other temples.

People come from afar to see this majestic temple.

A flag tied over a temple always flaps in the opposite direction.

Standing on Puri, you can see the Sudarshan Chakra above the temple.

Also characteristic of this chakra is that it is always visible from any direction.

No birds can be seen above the temple.

The dome is designed so that no shadows can be seen even during the day.

On a normal day, in the evening the wind blows from the sea to the land and vice versa, but in Jagannath temple, in Puri, it is the other way around.

Prasad prepares 7 large jars stacked on top of each other.

Here, wood is used as fuel.

During this process, the ingredients in the upper bowl are cooked first, and then the lower bowl is cooked one by one.

As soon as you enter the temple in Singhdwar, no one can hear the sound of the sea.

It sounds better in the evening.

A total of 500 chefs and  300 assistants work together to make offerings in the temple.

The problem with Jagannath Temple in puri

Like any Hindu temple, Jagannath Puri is ruled by pandas.

Before entering the temple grounds, pandas surround tourists and devotees.

Pandas keep taking money for the worship of some kind each time.

In addition to the main hall of Puri, there are 30 small temples, which require compulsory donations in addition to offerings.

On the premises of this temple, money is collected from devotees for charanamrit in the leaves of Tulasi.

Like other temples, there is no prasad in this temple.

and you have to buy them with money.

You also have to pay a different price for each prasad.

On the day of the Japanborg offering at the temple, the general public is not to receive prasad.

Offers are sent to the store for sale.

Here you can understand the fear to see on the territory of the temple.

In this temple, only one family has a monopoly on raising and lowering the flag,

and their own family members are responsible for raising and lowering the flag while climbing the temple walls.

As soon as the flag change at the temple in the evening, the sale of the flag in the market begins.

You will never see it in any other Hindu temple in the country.

One of the four major dhams is also the most polluted.

The main issue of this temple is pandas, which in the name of their faith hide various objects from  visitors and  leave them in their

Also, traces of breaking pandas throughout the temple.

But persons of religions other than Hinduism are prohibited from visiting this religious site.

Only Hindus were allowed in this temple.

As many times foreign invasions were held in temples and nearby areas.

Temple is open from 5:00 am till midnight.

Devotees come throughout the year.

But if you want to see Ratha Yatra must visit during July/August.

So, come here for Annual festivals like Chandana Yatra and Snana Yatra.

How to reach Temple

But Puri does not have an airport, the nearest airport is Bhubaneswar.

Due to this, its distance is about 53 kilometers.

Another airport is in Visakhapatnam, from which its distance is about 372 km.

Puri is easily accessible by train.

However, the railway station’s distance from the temple is 6 km.

So, direct train to Delhi, Mumbai, Kolkata, Chennai, and Ahmedabad is available.

Every major city has a road to Puri.

So, the Bus facility is available here 24 hours a day. 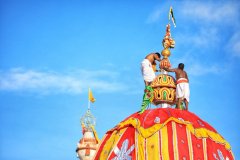 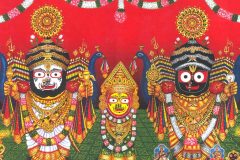 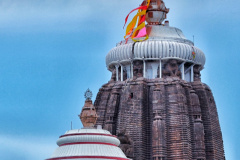 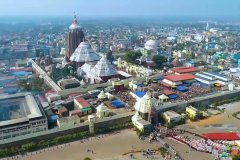 Other temples in Puri